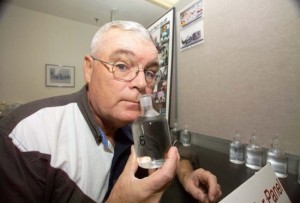 George Aldrich isn’t an expert on space travel and building shuttles, yet, he holds one of the most important jobs at NASA. The agency doesn’t send any object to space unless he’s smelled it first! The master sniffer, also known as ‘Nostril-damus’, has protected hundreds of astronauts just by smelling the stuff that will be put into spacecrafts.

Aldrich can smell anything and everything, even the things that most of us find disgusting. He has had a superior sense of smell since childhood, but his special talent was discovered only around 40 years ago. He was a firefighter in White Sands back then, and NASA had started to look for sniffing volunteers. So Aldrich applied and he did exceedingly well at their calibration test in which he had to identify the seven primary odors – musky, minty, floral, ethereal, camphoraceous, pungent and putrid.

Since then, Aldrich has worked for NASA at their White Sands test facility, where his nose reigns supreme. The job might seem comical, but just how important is it? As it turns out, very. “Astronauts could actually get sick from being subjected to obnoxious odors,” said Aldrich. And it’s really true – the Russians had to abort a mission in 1976 because their astronauts couldn’t tolerate a hideous stench inside their shuttle. Too bad they didn’t have their own ‘nasal-naut’ like the Americans do.

“I used my sense of smell for 38 years to smell stuff before it goes into space,” he said. “What makes me really important to NASA is that I actually use my sense of smell to help protect the astronauts from obnoxious odors in space. I feel like I’m a bodyguard for the astronauts. I’ll smell it here, you know? I’ll-take-the-bullet type thing, before you are actually subjected to it.”

Aldrich can detect more than 10,000 different smells like the rest of us, by using up to 400 of his nasal receptors. But unlike most people, he uses them to their full capacity every day. “I try to keep my sense of smell in tune. So I play games with odors, where other people might smell something and just move on. My friends and family think I’m a little crazy,” he says.

According to Suzanna Harper, manager of the nasal lab at NASA, Aldrich’s work is invaluable to the astronauts. “Here on the ground if there is some kind of a foul odor, maybe someone was in the bathroom or cut an onion open, it eventually airs out,” she explained. “What is causing that smell to go away is really the dilution of additional air coming in, but when we’re in the space station or the shuttle, there is no air. We don’t open a window and get some fresh air in there. What we have to do here on the ground is verify that we’re not sending new odors up there because once they’re up there, they’re stuck there.”

Aldrich says that astronauts are actually allowed to have a small bag of personal belongings that usually includes things like a Bible or family photos. “We had an astronaut who wanted to build a ship in a bottle, and so we were looking for different types of glues. Everybody knows how that is, it just reeks of odor.” And the first woman in space, Sally Ride, wanted to take her mascara, but Aldrich had rejected it. “She had no mascara in space. Not that particular brand anyway.”

Aldrich’s unique talent has made him quite popular in the United States. He has appeared on TV shows like ‘To Tell the Truth’, where he introduced himself humorously: “My name is George Aldrich, and I have a job that stinks!” He also served as a judge in OdorEaters ‘rotten sneaker’ contest.

In his long career, Aldrich has sniffed over 780 different materials, and he isn’t showing signs of wanting to stop any time soon. “I guess it’s just a good, good nose,” he said. “And it’s been good for over 30 years.”