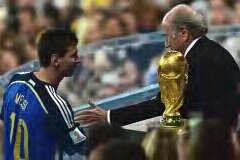 Lionel Messi was a deserving winner of the Golden Ball at the World Cup, according to his Barcelona team-mate Sergi Roberto.

The Argentina star started the tournament with a bang but faded as the competition progressed and was a peripheral figure as his side lost to Germany 1-0 in the final.

Despite that, the 27-year-old was still named the World Cup’s best player – a decision greeted with widespread surprise by players and fans alike.

However, Roberto is insistent that Messi was the rightful winner of the prize and demanded he receive the “respect” his performances warrant.

“I saw Messi at the World Cup as the same as in this past year, the best in the world,” he told reporters.

“The award is deserved and the criticism is unfair, he wanted to win the World Cup and he deserves maximum respect. He has given a lot to this club and Argentina.”

“He’s a very good player, he has shown at the World Cup and with Bayern. He hasn’t joined us but any player with his quality would be welcome at Barcelona.”{GOAL}