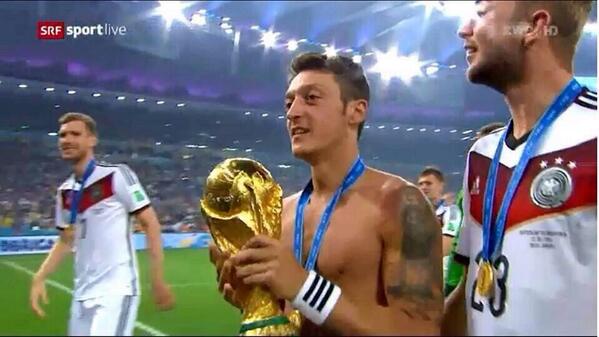 Germany and Arsenal superstar Mesut Ozil is to donate his £350,000 [$600,000] World Cup winnings to the children of Gaza following his country’s
triumph in the global spectacle.

As the conflict in the Middle East rages following a failed ceasefire, Ozil is set to give the £237,000 bonus he received for helping Germany win the final, and the £118,000 he received for Germany’s semi- final win, to the occupied territory. He is however yet to confirm the actual beneficiaries of his largesse.

Ozil is of Turkish descent and a practising Muslim who recites the Quran before games. He controversially opted not to fast during the tournament, which fell in the holy month of Ramadan in which Muslims fast from dawn until sunset.

According to the Middle East Monitor, Ozil caused controversy when he declined to shake a Fifa official’s hand because of his support for Israel.

Arsenal’s club-record signing (£42.5 million) has quickly settled to life in England, winning the FA Cup with the Gunners before playing an integral role in Germany’s march to victory in Brazil.

A nine-day outbreak of conflict between Israel and militant group Hamas has seen over 1,000 rockets fired into Israel and over 1,300 airstrikes on the Gaza Strip.

Palestinian officials have said that 207 Palestinians have been killed in Israel’s Operation Protective Edge while one Israeli has died in southern Israel after
being hit by a mortar.

The Gaza Strip is a narrow territory occupied by Israel currently under a land, sea and air blockade.

According to the United Nations and aid agencies, humanitarian conditions have continued to deteriorate rapidly because of the blockade.

In addition to Ozil’s act of generosity, other Muslim representatives at the World Cup have also sent their prize money to the occupied coastal enclave.

After reaching the second round of the tournament, Algeria donated their £5.25m prize money to the people of Gaza.

Algeria striker Islam Slimani announced that the entire squad would donate the money to the territory because “they need it more than us”, according to a
report in the Daily Mail.{Ibtimes}