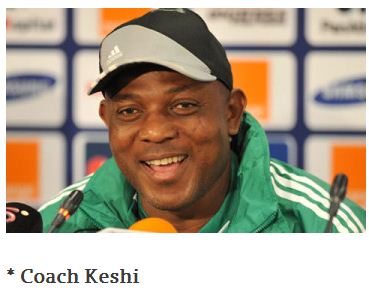 According to the report, the new deal is expected to worth nothing less than N168 million, while Keshi’s monthly salary would also be increased to N7million for Keshi to remain at his post.

Prior to Nigeria’s exit from the ongoing 2014 FIFA World Cup in Brazil, Keshi was being paid a monthly salary of N5 million.

However, the 0-2 defeat to the Les Blues of France in the round of 16 of the world cup ended Keshi’s contract with the NFF.

It was gathered that the Nigerian football governing body decided to offer Keshi an improved deal amid confusion over the status of his employment.

Some reports had claimed that Keshi, who is yet to append his signature to the new deal, complained about the clauses contained in the new contract papers.

Speaking with theeagleonline.com.ng on the matter, Keshi stated that part of what he would demand before he accepts the new offer is for the NFF to provide him with an official accommodation and a car to function.

“My contract effectively ended with the Super Eagles after our ouster from the World Cup.

“So, there is no reason resigning from the job.

“However, we are yet to agree a new contract.

“So I remain a free agent until otherwise,” Keshi added.

It could be recalled that the Nigerian coach was reported to have resigned after the defeat against France.

Few hours after the report, Keshi denied the rumours on his twitter account, saying coaches don’t resign their appointment on the pages of the newspapers.

The NFF had released a statement afterwards saying Keshi still remains the Super Eagles coach, adding that it would not hold him if he decides to quit his job and move on.

Meanwhile, Nigeria’s captain to the Mundial, Joseph Yobo has since announced his decision to retire from the national team after over a decade of illustrious career for the country.

Goalkeeper Vincent Enyeama and Osaze Odemwingie are being rumoured to be considering to retire too.