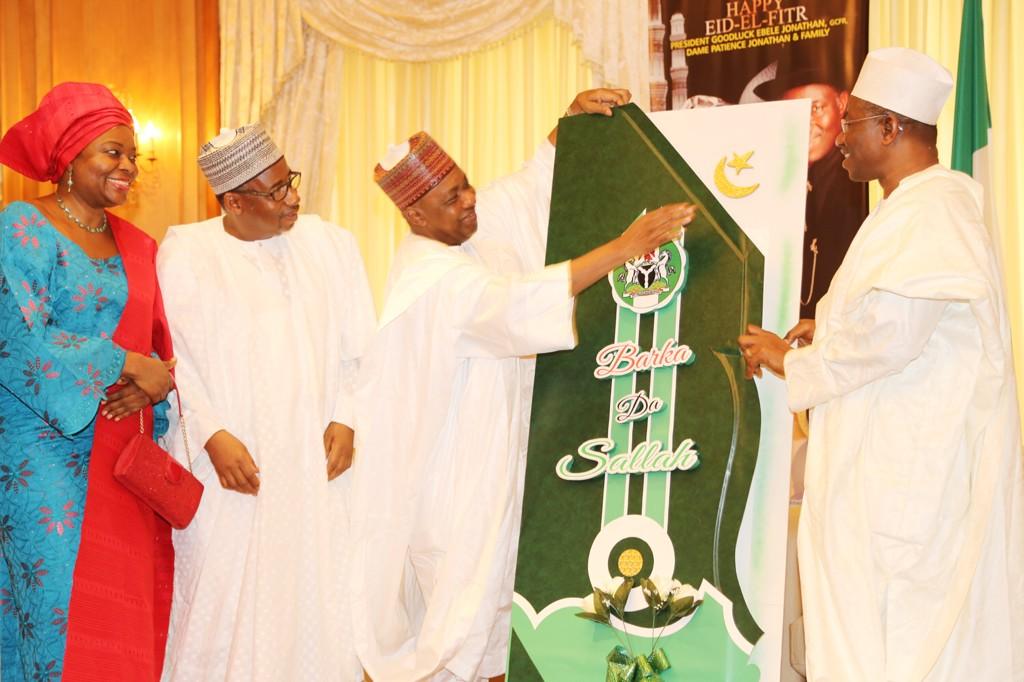 The two leaders survived the attacks that killed more than 40 people.

Speaking when a delegation of the Muslim community, led by Vice President Namadi Sambo, paid him Sallah homage at his official residence, in Abuja on Sunday, President Jonathan appealed to clerics in the country to preach peace and unity to their followers “and not the gospel of hate”, saying that the country could not develop without peace.

He said, “Not too long ago we had these dastardly attacks in Kano and Kaduna. We stand to condemn these acts of terror on our people.

“And, we extend our condolence and sympathy to the bereaved and those who might have been injured.

“The recent attacks in Kaduna, especially where Sheik Dahiru Bauchi and Gen. Muhammadu Buhari were targets are quite instructive.

“You can imagine if these two people had died in the attacks.

“Sheik Bauchi is one of our top Islamic preachers; he has millions of followers. Buhari, a former Head of State and leading political figure, has massive supporters.

“On the same day, people wanted to kill them‎; those who planned the attacks are clearly sons of the devil, because if they had killed these two people, we wouldn’t have been here today; this country would have been in turmoil.

”We couldn’t have gathered here to celebrate”.

Mr. Jonathan thanked God for saving their lives and preventing “a major calamity” that would have befallen the country.

The president restated that the Federal Government was doing everything possible to end the activities of Boko Haram and other terrorist groups in the country.

He used the opportunity to renew his call on Nigerians to continue to
work with government in that regard.

“Government is looking on how to raise funds; in fact, we are launching the fund on Thursday.

“This is to ensure that the widows, orphans, those whose business premises have been vandalised and even our worship places, mosques and churches, that have been destroyed, we will rebuild.

“Government alone cannot do it because we will need huge sums of money. The Nigerian private sector is vibrant and willing if they see sincerity in government.

“We have demonstrated that very clearly and we are hopeful that on that day, reasonable amount of money will be raised.

“And, we will continue to raise money until we are able to cushion the effect of these excesses and at the same time, we are strengthening our security services so that they will be able to confront this menace”, he said.

Mr. Jonathan said that he was honoured by the visit of the Muslim community after the Ramadan and prayed God to listen to and answer their prayers.

Earlier, Mr. Sambo commended the president for fasting with Muslims during the Ramadan, and for welcoming the delegation to his residence.

He prayed God to continue to give the president wisdom and guidance to lead the country to greater prosperity.

The vice president also prayed for peace in Nigeria and for Allah to bring all evil, including Boko Haram, to an end.

He urged Nigerians to be their brother’s keepers “for peace, tranquility, total reconciliation and stability to reign in the country”.

During the visit, the Minister of the Federal Capital Territory, Bala Mohammed, paid homage to the president on behalf of Abuja residents.

He said; “We have always enjoyed humane and civil disposition that is why you see Muslims and Christians coming to pay homage in line with your exemplary leadership.

“We pray that Allah will grant you courage and wisdom to continue to steer the ship of leadership despite the current security challenges”.