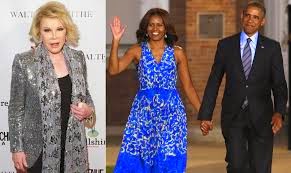 Wow! is this even legal, i mean can she be allowed to say such on air.

Controversial Fashion Police host, Joan Rivers was in New York City Monday at a bookstore appearance, where she also officiated an impromptu g*y wedding between two of her fans, when a reporter asked her if she thought the US would ever see a g*y president.
Joan replied:
“We already have it with Obama, so let’s just calm down.”
As she started walking away, 81 year old Rivers added: “You know Michelle is a tr**anny.”
When the reporter asked her to confirm what she had said, Rivers said:
“A trans***gender. We all know.”