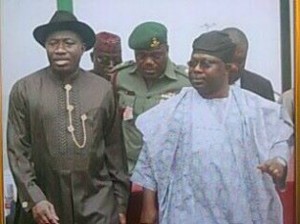 The Coalition of Oodua Self Determina­tion Groups (COSEG) has warned that it will not sit back and watch the Presidency turn the South-West to a the­atre of war.

The group, in statement issued and signed by its Chairman and Secretary, Ifedayo Ogunla­na and Rasaq Olokooba re­spectively, said with the appointment of Minister of Police Affairs, Alhaji Jelili Adesiyan and Minister of State for Defence, Mus­liu Obanikoro, President Goodluck Jonathan has shown an ulterior motive to cause chaos in the region.

The pan-Yoruba Organisation said both Oban­ikoro and Adesiyan were appointed ministers so as to use them as instruments to undermine the wishes of the electorate in Osun and Ekiti States.

“We shall not continue to fold our arms and allow the Jonathan-led govern­ment continue to destroy our glorious future. It is now clear that President Jonathan has confirmed our fears that Jelili Adesi­yan, the Minister of Police and Musiliu Obanikoro were appointed as minis­ters because of Osun and Ekiti election”, COSEG said.

It noted that what played out in Ekiti State in the name of election was an eyesore, cautioning against a repeat of such shenanigans in Osun election. It also called on the president to rein caution the PDP governorship candidate in Osun, Senator Iyiola Omisore, to stop harping on the use of force and violence in the forthcoming election.

The group quoted Omi­sore during a campaign at L.A Primary school Ara­romi, Oke-Odo, Ife South Local Government, to have said: ‘Don’t be afraid when you see police as long as you are with us. You are safe. It is going to be tough for our opponent as we are going to use all available power to hound them into detention before election’.

COSEG said: “This statement from Omisore is dangerous and will not only destroy the credibility and fairness of Osun elec­tion but also destroy the name of Nigeria police, in the eye of the whole world.

“The statement has thus confirmed that the people of Osun and groups like COSEG have a lot to do to protect our people from be­ing arrested and also to pro­tect the votes of the people.

“We must make it clear that the actions and body language of the Presidency supports Omisore’s brag­ging and it is one attitude that will surely truncate our democracy if unchecked.

“Is this one of the pro­cesses meant by Vice Pres­ident Namadi Sambo when he said some days ago they are going to take over Osun.

“We therefore appeal to President Jonathan,Vice President Namadi Sambo, Jelili Adesiyan, Musiliu Obanikoro and the In­spector General of Police not to encourage banditry, recklessness, illegal arrest and other crude plans as is being mouthed around by Omisore”.