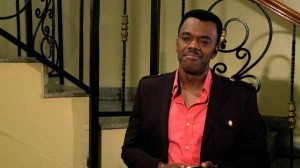 Famous actor Wale Ojo who is a Nigerian-British with awards in his closet has been added to the star studded cast of Africa Magic‘s hit soap opera – Tinsel.

Wale Ojo is  more known for the television series Meet The Adebanjos, which depicts the hilarious lives of a Nigerian family living in London.

He plays the role of Nosa, a well known established comedian and a lawyer by training known for uttering outrageous truths and taking positions that go against conventional wisdom, but always with a grain of truth in them.

Nosa is a well travelled, educated, informed as well as a very street savvy Nigerian with humble roots which makes his materials as a comedian well thought out and informed.

Soon coming to the realisation that he wants marriage and children, he embarks on a mission to find a partner but soon realises that as a result of his fame and his many unsuccessful romantic relationships in the past due to his battle with bipolar disorder, Nosa faces difficulties selecting the right partner, but will soon be romantically linked with the most unusual Tinsel character.

On July 7th, viewers will get to see Wale Ojo bring his craft and talent as a trained actor.

Speaking on the role, he says: –

“I am very excited and looking forward to the wonderful challenge to be a part of the Tinsel train, hoping that with the commendable gang of casts and crew, we’ll all be able to ride the Tinsel train to higher glory. Nosa is certainly going to bring to the screen many hilarious moments laced with a few truths and plenty of wisdom”

Controversial ex-Big Brother Nigeria housemate, Tacha Akide simply known as 'Tacha' has finally sold all her products which she has been advertising on her...
Read more

Former Big Brother Naija reality TV star, Khloe took to her Instagram page to reveal that she would help those who got displaced from...
Read more
- Advertisement -