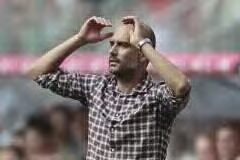 Bayern munich manager Pep Guardiola is eager for a victory when his side face club side Chivas Guadalajara in a pre-season friendly.

The former Barcelona coach is fully aware of the threat Chivas pose, but wants his team to give their all.

The team are currently in US for the Pre-season games, and Pep is eager to make a mark in America.

He noted: “We are in the beginning of the season and of course all these kinds of games are important and we travel with a lot of desire to the United States because it’s a huge country and we are so pleased to be there.

“We are playing against a Mexican team, I played there. I know Chivas very well because I played them two or three times when I was training Barcelona.

“Mexican football is very good; it is a good test for us. There are a lot of Mexican supporters in New York and we are delighted to play against them.

“We have to play good because the Mexican teams are very good with the ball; they are so dynamic because they are small guys but also quick and fast players, and we have to be prepared as well as possible.

“They play so well and their national team did well in Brazil. It is a good test for us and I am pretty happy because they play with three defenders but I don’t know how Chivas is going to play. I imagine that they play good and we are going to play the best as possible.”