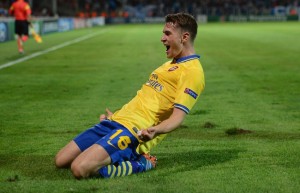 Arsene Wenger says he instructed Aaron Ramsey to go back to basics in the hope of jarring the Welshman out of the malaise that affected his game so much that he became ‘unplayable’ in front of frustrated fans at the Emirates.

After over a year on the sidelines and two short loan spells at Nottingham Forest and Cardiff City, Ramsey returned to the Arsenal first team fold in late 2011 but struggled for 18 months to find the form his pre-leg break performances had promised.

Labeled a failure by certain sections of the fanbase after a number of below-par games, Wenger revealed today that he told the midfielder not to take the abuse personally before pleading with him to simplify his approach in the hope his confidence would return.

“He went through a bad patch, and I couldn’t play him any more at Emirates Stadium,” Wenger told assembled guests at an Emirates Business Breakfast in New York.

“I sat down with Aaron and I told him, ‘I don’t think people don’t like you, but they don’t like your game at the moment’. It was in his hands to change that.

“He had to come back to a more simple game. When you go through a bad patch in life you always go back to the basics. In football you slowly get confidence back and then you play naturally again.

“The problem is that if you play a great shot in golf or tennis, when you go to your next game you want to play the same shot again. But it doesn’t work like that. You have to do basics, basics, basics, and then slowly you get into the zone where it becomes easier.

“You have to get back to basics to gain confidence. Aaron accepted that, he did it and he gained confidence again. Then you saw a different player, because he is intelligent, and when I came out of the meeting I knew this guy would come back.

“Aaron listened and he realised he had to change his game. That’s why he came back.”

The first signs of Ramsey’s renaissance took place at the tail end of the 2012/2013 season when, in the absence of Jack Wilshere and Abou Diaby, he returned from the wing to a central berth alongside Mikel Arteta.

He played nine consecutive games with increasing poise as the Gunners embarked on an 11 game unbeaten run that saw them successfully track down Spurs to seal fourth spot.

We can only assume he spent the ensuing off season fasting and being tempted by the devil because by the time the 2013/14 season started he was well and truly deserving of the mantle ‘Welsh Jesus’*. He’s not looked back since.