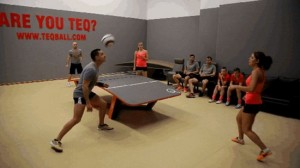 What do you get when you combine Table Tennis and Football, and throw in a dash of technology? The answer is Teqball, an addictive new sport that’s becoming more popular every day. The sport involves the bouncing of a ball between opponents, off a highly sophisticated table designed to keep things fair.

To play a game of Teqball, all you need are a Teqboard and a ball. According to the official website, the Teqboard is a sporting equipment, very similar to a ping-pong table, that’s been designed keeping in mind the rules of mathematics and physics. So a ball will bounce off any point on the board, making it easy to reach and control. Although you can’t touch the board, it can withstand a great amount of pressure, making it durable and safe to use.

The ‘net’ at the center of the board is made of polycarbonate/plexiglass, ensuring that the ball bounces off it in a fair manner. Thanks to the unique design of the Teqboard, the only thing that matters in the game is talent; there’s no room for luck. The ball used for playing is a regular football, preferably a FIFA size 4.

Okay, so now you have a board and a ball, how do you start playing? Well, the rules are pretty simple – each player gets a maximum of three touches per play, you can’t have the same body part touch the ball twice in a row and you can’t touch your opponent or the equipment.

You could choose to play singles (two players), or doubles (four players), in which case the ball has to be passed between players on the same team in each play. A player can serve using any body part but the serve must always fall behind the serve line. The ball should not hit the corner of the Teqboard, and you cannot cross over to your opponents side, either.

Once you get the basics right, the inventors of Teqball say that you can make up your own rules and play the way you like. There’s other interesting things you can do with the Teqboard as well, like Teqtennis (played with racquets and a smaller ball) and Teqdodge (similar to dodge ball).

Teqball is the brainchild of close Hungarian friends Gabor Borsanyi and Viktor Huszar. While Gabor is a former professional football player, Viktor is a football loving computer scientist. The nuances of the sport were Gabor’s department, and Viktor put in the science behind the project. Together, their dream is to bring real football into people’s homes, played anywhere, anytime.

The main purpose of the Teqball is not to serve as a competitor to football, they say, but to enhance your skills and master air-to-air ball handling. According to the website, it “helps you improve your decisive ‘first touch’ moves and eventually grow you into a more confident, spectacular and skilled player.” Teqball is great for warm-up, cool down, rehabilitation, improving decision making and developing stamina.

“The number of touches in Teqball is incredibly high,” Viktor pointed out. You can get up to 300 within half an hour. This is the fastest training exercise ever created. Teqball is the only equipment which can objectively measure the football skills of a player, but in a fun filled way.”

The board comes along with an optional device called the Teqbox. It makes use of state-of-the-art stereo computer vision to automatically track ball and player movements during a game, so it can enforce rules, evaluate scores and assess player skill development. Using this data, individualized training programs can also be designed and downloaded onto smartphones/tables.

Ever since they introduced Teqball on Kickstarter, the sport has become immensely popular – even celebrities are endorsing it. According to Shane Black, the director of Iron Man 3, Teqball is the future of keeping your kids fit. “I came in to take one look at this and I’m thinking, this is a really innovative and wonderful tool,” he said.

Several football champions are in favor of the sport as well. Like Ronald Koeman, top goal scoring defender in the world, said: “Teqball is a very easy exercise. It’s not difficult, everybody will understand this. And it’s a good exercise to be a more technical player.”

Gabor and Viktor have high hopes for their dream project – they hope that Teqball will become an Olympic sport some day. If you’d like to support them, you can pre-order a Teqboard of your own by pledging $300 or more to the project, through their Kickstarter campaign page.