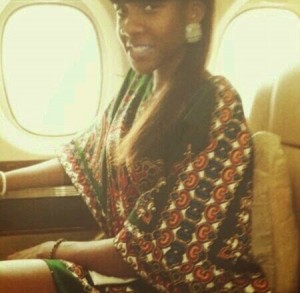 What you are about to see and read is what desperate girls do these days to get a little attention.

Apparently, a young girl appeared on Twitter and is trying to play a ‘Davido’ on Wizkid and his boo Tania Omotayo.

A lot of chicks have been opening up in the most unappetizing ways on social media recently, and now pretty Tania Omotayo is the latest victim as she comes under attack from a model based in Houston, Caroline Ikpea.

Last Night, Caroline Ikpea decided to attack Tania with some mean tweets and let the whole world know that she is the one ‘fuxing’ Wizkid while Tania is forming love’.

Remember Tania and Wizzy broke up sometime and suddenly started flaunting their love all over again.

Guess someone is not excited about that! Caroline has now deleted her @Tania tweets while Tania tweeted in reply a queen’s crown.

Check out the tweets below: –