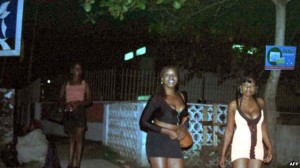 This might sound weird but the truth is that I have always wondered what prostitutes do with their lives when they become old and unattractive, well, this report kind of answers my question.

A well known prostitute in Zimbabwe known as Lima Mankarankara, 66, said she and her peers have a “consultancy service” for younger sex workers in Mashonaland Central Province, Zimbabwe, to stay relevant in the industry.

“We teach them how to handle clients well and the proper use of condoms,” she said.

“Men take advantage of girls, so this is a way of making sure the girls stay safe and avoid unwanted babies while getting a little something for ourselves,” Mankarankara added.She said the girls show appreciation for the lessons through money or food for the consultancy provided. “Some of the girls are underage and cannot access condoms, so we give them the condoms because as much as we hate to admit it, the girls are already in business at the age of 12,” the elderly woman said.Together with three other retired sex workers, Mankarankara runs the organisation and procures sanitation, condoms and pregnancy test kits.Dalitso Mwale, one of Mankarankara’s clients said the women did not ask for money in return for their services.“We sometimes give them the money as a token of appreciation, however, they are grandmothers and have daughters who have ventured into the trade and they want to avoid teen pregnancies,” said Mwale.Mwale, who has a five-year old son, said she had ventured into prostitution as a way of sustaining her siblings as they are orphans.“Because we did not have a service like the one ana ambuya (Mankarankara and crew) are running, I fell pregnant.“Thankfully I did not get the virus but this taught me to be careful all the time. Now because of the service, a lot of girls like me will be saved from the trauma of having an unwanted child and HIV,” she said.I guess this happens only in Zimbabwe.