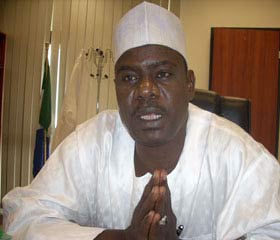 Senator Mohammed Ali Ndume (PDP, Borno South), who is standing trial over allegation that he is a sponsor of the Boko Haram sect, yesterday stunned a Federal High Court sitting in Abuja when he claimed that his old mobile phone number, which has been in the custody of the court for about a year, has been making repeated calls to his new line.

Ndume, who spoke through his lawyer, Mr Rickey Tarfa (SAN), told Justice Gabriel Kolawole of the strange development during his trial on Wednesday.

A visibly shocked Justice kolawole said, “I don’t know much about technology but how can a phone that is switched off be able to receive and make calls? I think you should go to MTN for clarification and also confer with the prosecution counsel to know what to do”.

“Really, it is strange to me that a phone line that is not active can be used to make calls”.

The senator said he was compelled to seek clarification from his network service provider.

In a letter to MTN communications, Ndume said he complained that he had been receiving strange calls from his previous number 08035998045.

According to him, the first call to his new number was 9:56am on 13th June 2014 which ended after a few seconds.

“Then I got the second call from my former number 08035998045 which is supposed to be in the custody of the Federal High Court at 9:58am which also went off after few seconds”.

He said he was again called by the number at 10:07 am and when he requested to know who was on the other end, the caller identified himself as George.

“He asked me whether I got his text message and I said no”, Ndume added.

His letter to MTN reads: “When I tried to call back, I got the voice message that, ‘the number you are trying to call is not available at the moment please try again later.’ “I Immediately called MTN customer care centre using 180 and I was connected to one Juwairah Muktar, after lodging my complaint, she asked me to hold on, so that she could talk to her team leader Sybil Uwake.

“She subsequently got back to me and advised that I should report the case to the nearest police station.

“I accordingly reported the case at Apo Police Station where I was made to write a formal complaint.

“In view of this and the fact that I am currently standing trial at the Federal High Court in connection with the use of my phone and the seriousness of the case, I wish to request for the following information: (1) My call data record for 13th June, 2014, (2) Identification of the caller and the location where the call originated; and (3) the IMEI number of the phone used”.