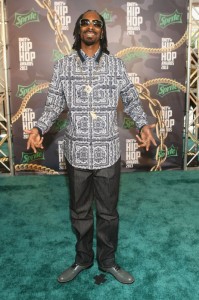 Veteran rapper — Snoop Dogg is synonymous with weed (cannabis) and other sorts of drugs.

The 42-year-old rapper – whose real name is Calvin Cordozar Broadus Jr. claims that he once smoked marijuana in the bathroom at the official residence of president Barack Obama in Washington D.C.

The ‘Young, Wild and Free’ hitmaker tricked security into thinking he was going to the toilet and he even managed to persuade them to let him light a napkin.

He explained: ‘I said [to the security guards], ‘May I use the bathroom for a second?’ And they said, ‘What are you gonna do, number one or number two?’ I said, ‘Number two.’ So I said, ‘Look, when I do the Number two, I usually, you know, have a cigarette or light something to get the aroma right.’

‘And they said, ‘Well you know what? You can light a piece of napkin.’

He then inhaled his cigarette and added: ‘And the napkin was this.