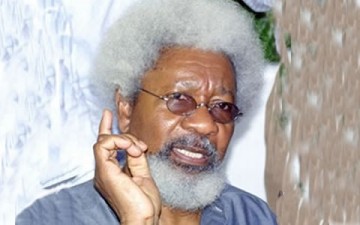 The national leader of the Igbo Ezue Group, Chief Chekwas Okorie, has attacked Nobel Laureate, Prof. Wole Soyinka, for comparing the killings of Nigerians by Boko Haram to the genocide on the Biafran people during the Nigerian civil war.

Okorie said the statement credited to Soyinka in his interview with the AFP was grossly an overstatement, alleging that it smacked of a deliberate attempt to annoy the Igbo and the peoples that made up Biafra for the genocide they suffered in the hands of Gen. Yakubu Gowon, and the death of about two million people.

He cautioned that should Prof. Soyinka fail to apologise for his statement; as that was an attempt to re-open old wounds of the genocide, Igbo Ezue would mobilize all Igbo people not to associate with the renowned playwright and Nobel Laureate.

The political leader argued “in the extent of destruction, prosecution of the genocide, the casualty list and legitimacy, Biafra, a state with a government, could never be compared with a terrorist organisation.

“We consider Prof. Soyinka’s statement in the matter of Nigeria/Biafra war as insensitive, reckless and irresponsible. It is even more reprehensible, considering the fact that to some small extent, Soyinka was involved in that war to the point of being suspected by the Nigerian government at that time of conniving and collaborating with Gen. Chukwuemeka Odumegwu-Ojukwu, the Head of State of the defunct Republic of Biafra.

“To correct part of the deliberate misrepresentation as contained in Soyinka’s unguarded statement, we wish to state that the mandate given to Gen. Chukwuemeka Odumegwu-Ojukwu to declare the Independent State of Biafra was given to him by the then Eastern Nigeria Consultative Assembly and a large part of Mid-Western Region in the present South-East and South-South geopolitical zones of Nigeria.

“It was mischievous of Prof. Soyinka to reduce Biafra to a sole Igbo agenda that could have torn Nigeria up into ethnic regions”.

He continued: “The war was fought on land, air and sea. Starvation, as a legitimate instrument of warfare, was deployed as strategic policy of the Nigerian Government to annihilate not just the Igbo people but also the people of Eastern Region and the present Delta State. Market places and institutions of learning from primary to university institutions came under heavy bombardment by the Nigeria Air force resulting to the closure of these institutions for as long as the war lasted. Many Biafrans of school age lost a minimum of three years in their academic pursuit.

“On the other hand, the Boko Haram insurgency is for all intents and purposes, a faceless terrorist organisation confined in some remote places in the North-East geopolitical zone of Nigeria. As gruesome and horrendous as the attacks of the terrorists may be, it is clear that the school system in the North-East geopolitical zone is on-going”, Okorie said.