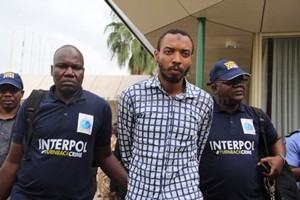 After weeks and even months of tortuous legal and diplomatic discussions between Nigeria and Republic of Sudan, the co-mastermind of the April 14, 2014 Nyanya bus terminus bombing in which scored died and hundreds wounded, Aminu Ogwuche, was yesterday, extradited from Sudan to Nigeria.

The terror fugitive was declared wanted by INTERPOL, following intelligence reports linking him and another fugitive, Abubakar Tsiga, who is still at large, to the deadly bomb blast.

Ogwuche, an army deserter, who took refuge in Sudan after the incident, arrived the Presidential Wing of the Nnamdi Azikiwe International Airport, Abuja at about 3p.m. on a special flight from Khartoum was received by the spokespersons of the police, ACP Frank Mba, Department of State Services (DSS), Marilyn Ogar, Defence, Maj.-Gen. Chris Olukolade and coordinator, National Information Centre, NIC, Mike Omeri.

According to the NIC coordinator, who briefed journalists on the delay in Ogwuche’s extradition, said it was due to diplomatic processes.

Omeri added that Ogwuche would be interrogated and prosecuted.

“We have just successfully been able to secure his extradition from Sudan and he is back to his home country to answer questions.

“Of course, the usual procedure will take place, he will be interrogated appropriately and charged to court when all the processes are concluded”, he said.

Ogwuche was handed over to the Nigeria Police Interpol Unit, who led him into an 18-seater Toyota bus and whisked away.

Meanwhile, the Inspector-General of Police, IGP MD Abubakar, while commending the personnel of the Nigeria Police Interpol Unit for a job well done, noted that the successful repatriation of the Ogwuche to Nigeria shows that the international coalition against terrorism championed by Nigeria is beginning to yield the desired result.