Home News Feed ‘Those who want to take power through the backdoor will die’ –...
Facebook
Twitter
WhatsApp 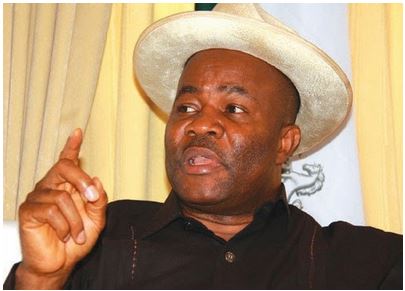 The Governor of Akwa Ibom state Godswill Akpabio has pronounced death on any politician who tries to gain political power through the backdoor come 2015, adding that the PDP in the state will continue ruling the state. The Governor made this declaration yesterday July 16th at the ground breaking ceremony for the construction of the new PDP Secretariat in Uyo, the state capital. He also stated that all those who betrayed him in politics would not enter into the government house

“Just as God threw Lucifer unto the Earth, those who have betrayed the governor of Akwa Ibom State will not enter the Government House. And because of impatience, Absalom (son to King David) wanted to take over by killing King David. And when David heard, he asked the people to leave him. This did not end up well with Absalom. He died before his father. Those who want to take power through the backdoor will die and the PDP will continue,” he said.