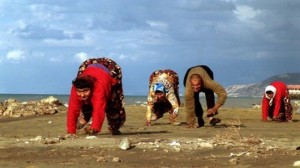 Walking on all fours might be fun for some, but for the members of one Turkish family, it’s the only way to move around. Five siblings of the 19-member Ulas family, from Hatay Province, suffer from a rare disability – they lack the balance and stability required to stand up straight, forcing them to move on all four limbs. The family was discovered in 2005 – 14 of them appeared to be completely normal, while five suffered a quadrupedal gait. Scientists have been baffled by the condition ever since.

The Ulas siblings were featured in a BBC documentary film, The Family That Walks On All Fours, in 2006. The film revealed that of the five siblings, two sisters and a brother have only walked on all fours since birth. Another brother and sister sometimes manage to walk upright. “It’s amazing as an example of a strange, strange aberration of human development,” said Professor Nicholas Humphrey, who visited the family twice during the documentary. “But their interest is how they can live in the modern world.”

Living in the modern world with a quadrupedal gait is no easy task. The siblings are often ridiculed for their disorder, and the family tries their best to protect them. The sisters remain indoors most of the time, spending their time crocheting. One of the brothers, on the other hand, is more adventurous – he travels to the local village and interacts with other people.

According to the film, a popular explanation for their unusual walk – similar to the movement of primates – was ‘reverse evolution’. Many scientists believed that the siblings were living proof that it is possible for humans to devolve. “I do not think they were destined to be quadrupeds by their genes, but their unique genetic make-up allowed them to be.” said Professor Humphrey.

“It has produced an extraordinary window on our past. It is physically possible, which no one would have guessed from the modern human skeleton. However they arrived at this point, we have adult human beings walking like ancestors several million years ago.” Recent studies, however, have disproved this theory. American scientists have now concluded that the walk is only an adaptation to a rare disorder.

A report published in the scientific journal PLOS One suggested that the siblings move laterally, unlike primates who walk in a diagonal sequence by repeatedly placing a hand on one side and a foot on the other. The siblings’ walk, on the other hand, is lateral and involves putting weight on the wrists instead of the knuckles. This is a clear sign of adaptation to cope with a loss of balance.

So scientists now believe that the gait could be a byproduct of a hereditary condition that causes cerebellar hypoplasia, which disturbs their sense of balance. The siblings may have developed quadrupedalism in order to adapt to the rare condition known as Uner Tan syndrome, named after the Turkish evolutionary biologist who first studied them.

“I was determined to set the record straight, because these erroneous claims about the nature and cause of quadrupedalism have been published over and over again, without any actual analysis of the biomechanics of their gait, and by researchers who are not experts in primate locomotion,” said lead researcher Liza Shapiro, from the University of Texas. “We have shown that the quadrupedalism resembles that of healthy human adults asked to walk quadrupedally in an experimental setting.”

Previously, biologist Uner Tan had suggested that people affected by this syndrome walk with a quadrupedal locomotion, and are also affected by primitive speech and severe mental retardation. During his first study, when he asked the siblings what year it was, each of them had five different responses: “80,” “90,” “animals,” “July,” and “house.” This, according to Tan, indicated reverse evolution.

“The idea of reverse evolution was just a flash, an ‘aha’ experience,” Tan revealed. “I suddenly realized that they were exhibiting the walking style of our ape-like ancestors. I was the scientist who first suggested the existence of reverse evolution in human beings.”

Well, it seems that while scientists are busy finding theories to explain the rare condition, there is no real cure in sight. The Ulas siblings will probably have to walk this way for the rest of their lives.