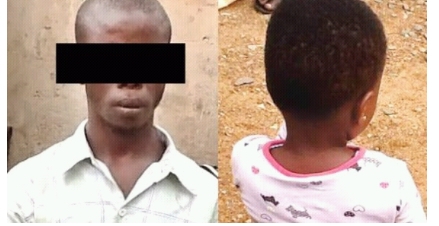 A 30-year old man, Mr. Inya-Okoro from Afikpo North LGA of Ebonyi State has been arrested by police for defiling a 2-year-old girl named Favour, Sunnewsonline reports
The suspect was alleged to have com­mitted the shameful act when the victim returned from school and was sleeping at the corridor of the house when the suspect, who also lives in the same compound allegedly pounced on her and committed the crime.
The state Police Public Relations Officer (PPRO) Mr. Chris Anyanwu an Assistant Superintendent of Police (ASP), who confirmed the incident said the suspect was arrested on July 14, 2014 at the scene of the crime when the members of the family alerted the police. Continue…

He said that the girl had been taken to hospital for medical examination and treat­ment while the suspect would be charged to court for prosecution, lamenting high rate of rape and defilement in the state.

According to Anyanwu,
“On Monday 14th July, 2014, one Ama Inya-Okoro, 30-year old man from Ubeyi development centre in Unwana, in Afikpo Council area, was arrested for defiling little girl, Favour. The girl has been taken to hospital for treatment by his father Mr. Ude, Ebeke. The suspect confessed to the crime and will be charged to court for prosecution.
“This is another disturbing trend, the issue of rape, defilement and sex related offences.
I don’t know why we have regular oc­currence in the state. The people should not leave their children especially, female ones without close watch. Just like in this case, the girl was sleeping but nobody was there with her when the suspect took the advan­tage and had access to the girl. So, parents should be careful and monitor their girls and ensure that they don’t send them on errand alone to avoid such cases of rape. I urge the people to always ensure that they raise alarm whenever they see such act and report it to the nearest police station” he said.

In an interview with Crime Watch, Ama Inya-Okoro admitted to have committed the crime but blamed it on evil urge for sex.
According to him,
“What happened was that I went to look for job as laborer on the fateful day but could not get any job and I returned home. As I was washing my cloth I saw the girl laying down sleeping wearing only pant, I rushed and carried her and have sex with her. It was ‘conji’ that caused it and I don’t have money to go for mature girls.”
The father of the girl Mr. Ude Ebeke that he was at the church when the incident happened. A neighour called to inform me home and I rushed home to found my two years old girl was defiled by a nieghour, Ama Okoro.
“On Monday July14, 2014, I was in the church when a woman came and called me and told me to go home, I quickly rushed to my house, I didn’t see anybody, I ran to our village square and  saw group of people there gathered. It was there I saw my daugh­ter and one of the leaders of age grade who first arrested the man and brought him to the village square.
“It was there that I was told that one Ama Inya Okoro raped and defiled by two year-old girl. So, I wanted to call police but they told me that they had already contacted police and as I was there police came and took all of us including the suspect to the police station where I made a statement. The mother traveled that day and the girl went to school before I left home. My sister will tell more on what happened because I was in the church,” he said.
The person who was with the girl when the incident happened, Miss Stella Egwu said that she was cooking in the kitchen while the victim was sleeping at the corridor when a woman alerted her.
“I was in my place cooking when the little girl came back from school and after some time she went and slept at the corridor. As I was cooking in the kitchen I heard voice calling us to come and see the man that was raping the little girl, I came out and saw the man standing with the girl, sperm in her private. As we were talking people gathered and took the suspect to the village square where they called police” she explained.