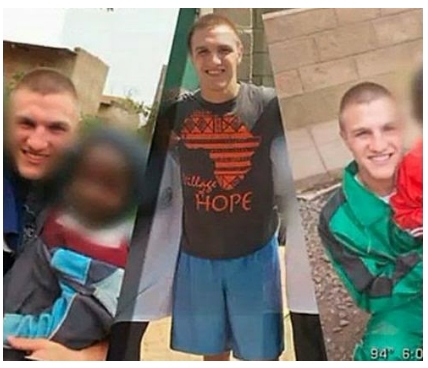 According to a report on KTLA a US teenager faces a possible life in prison sentence after authorities say they learned about shocking crimes he allegedly committed on an African mission trip.
The suspect was volunteering at a Kenyan children’s home when he allegedly raped and molested a number of young children between the ages of four and nine.
According to court records, 19-year-old Matthew Durham (pictured above) confessed to raping several young girls, forcing some boys to perform oral sex on him and even making other kids watch.

“This is a young man in our community that made choices to exploit children in an orphanage,” said United States Attorney Sanford Coats. “It’s a true tragedy all the way around.”
The 19-year-old suspect traveled overseas with a group called Upendo. Upendo is an organization that assists neglected Kenyan kids by providing food, housing, clothes and religion.
While Durham volunteered to travel overseas several times over the last two years, on his last visit, the criminal complaint alleges, “Durham requested to stay at the children’s home in an ‘overflow bunk’ rather than at an offsite facility.”
During that visit, several alleged victims claimed Durham “often touched them in a sexual manner or told them to touch themselves while he watched.”
Once confronted, Durham allegedly came clean.
“A caretaker at the orphanage noticed something wasn’t right and confronted Mr. Durham. He admitted to some of the acts,” said Coats.
The affidavit continues, “The victims are believed to be both boys and girls between the ages of four and nine, at least one of whom is HIV positive.”
Prosecutors say while the alleged sex crimes were committed overseas, Durham can be held accountable for the crimes in Oklahoma.
Durham is being held without bond.