Chief of Army Staff, Lt. Gen. Kenneth Minimah has today revealed that his men will not stop fighting till they overcome and conquer the war against insurgency and terrorism. 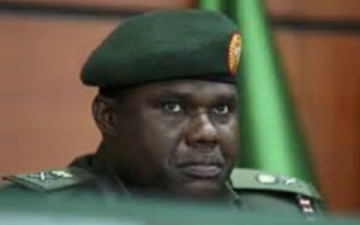 Minimah was speaking at the opening ceremony of the COAS third Quarter Meeting today at federal state capital Abuja, he also asked the general public to be understanding of the toughness of the war.

He also said he understands the peoples cry to see an end to all the insurgent attacks in the nation but they have to understand that insurgent groups were enormous.

Minimah said: “Our nation is today faced with enormous security challenges. The upsurge in incidents of terrorism has shifted the focus of the general public to the Armed Forces, particularly the Nigerian Army.

“Our activities are increasingly coming under public scrutiny. While a lot of patriotic Nigerians have continued to support the Nigerian Army, others have used the opportunity to cast aspersions on our competence, integrity, and ability to rise to the occasion. The Nigerian Army is performing and I also know the expectation of the Nigerian citizens; the expectation is rather in haste. We need some time, we need patience. “We are fighting terrorism, we are not fighting a conventional war.

The Nigerian Army is a conventional army, we are also fighting terrorism. The terrorist is someone you don’t know; maybe someone who sold food to you or fruits to you in the morning, by afternoon, he is a terrorist. “We are having all that interplay in the battle fronts in the Northeast.

We have to be cautious to separate the terrorists from the law abiding citizens. We also have the human rights to protect because you just don’t go out and start killing people and say they are terrorists. Some of them are also innocent Nigerians. “We are bound by all the international treaties of human rights.

Therefore, we need time. I know the expectation of the Nigerian citizens is that this thing should have been over by yesterday.”

Minimah has been at the head of the Nigerian army since replacing Ihejirika earlier this year. He hails from Opobo and is from Rivers State

Minimah came from the Regular cadet course 25 of the Defence academy and was allowed into the Nigerian Army on December 18, 1981.

In September 2010 h was posted to Lagos as GOC  and before then he had been the commander of the brigade 1 at Sokoto, By 2011 he was promoted to the rank of Major General in the Army.