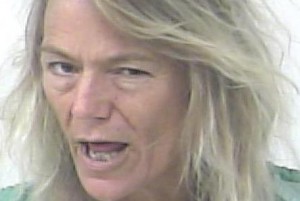 A Florida 56-year-old woman was arrested after her 25-year-old friend told St. Lucie County Sheriff’s officers that she chased him around with a knife and cane after he rejected her sexual advances.

The man was hanging out with Elizabeth Highley at her home and drinking wine when she started to put the moves on him. According to the man, when he rejected her proposition, she “got angry and lost control.”

Highley’s friend took off after she allegedly began chasing him around with a cane and a hunting knife.

A deputy who was at a nearby convenience store saw Highley run by “with a knife in one hand and what appeared to be a broken walking cane in the other,” the TC Palm reported.

Highley dropped the weapons and she was taken into custody. She is now facing a felony aggravated assault charge.

According to the arrest report, Highley reeked of alcohol and “didn’t appear to care that she was going to jail.”