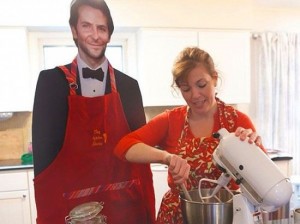 A lady from New Jersey is currently living every woman’s dream – she is actually spending every moment of her day with Hollywood star Bradley Cooper. Well, not with the actual guy, but a life-size cardboard cut-out of the actor. She says that she’s fulfilling her desire of a life with Bradley Cooper in the only way she knows how – by making it up!

39-year-old Danielle Davis has designed a unique life for herself and her ‘cardboard Cooper’, who is by her side 24×7. She shops with him, cooks with him, eats with him, mows the lawn with him, and even takes him to bed. You’d think that Danielle is a spinster who lives alone with her cats, but no, she’s married and has two children. Her family is strangely supportive of her Cooper experiment.

“My husband is totally supportive and thinks it’s funny,” she said. “Weirdly, some of his friends ask him if he’s okay with it, as if I’m hanging out around town with a real life Bradley Cooper instead of a cardboard version.”

“My kids think it’s fun but get a little impatient with it sometimes, especially if they think I’m not doing something they want me to do. Then they’re like ‘It’s Bradley Cooper this and Bradley Cooper that! My daughter is young enough to not realize it might be embarrassing – I even took him to her school. My son would be mortified if I did that to him!”

Danielle photographs herself and her family posing with the Cooper cut-out in all sorts of ridiculous poses, and posts them on Instagram in a series called ‘Today with Bradley’. She also runs a website – My Life with Bradley Cooper – where she chronicles her experiences with the celebrity. On the website, she answers the question everyone has been asking: “Why? Because, friends, this is America. So why not?”

“The fact is, while most of us don’t actually live our lives with movie stars, many of us wish we did. And so, being a forward thinking American, I have taken the bull by the horns, the horse by the reigns, the cardboard cutout of Bradley Cooper by the shoulders, and just pretend that I do.”

While her husband, Ed, is a relatively uninterested participant in these photographs, her children seem a bit more enthusiastic. But her daughter sometimes confuses Bradley Cooper with Mark Wahlberg. When asked about why she picked The Hangover star, Danielle said that it was because she actually went to college with him, at Villanova University. “I went to college with him for one year and we were in a play together, so I’ve watched his career from the get-go.”

“The pictures are a way for me to poke fun at how I ended up where I am and how/why my one-time stage equal has gone on to become an Academy Award nominee.”

While Cooper remains blissfully unaware of Danielle’s project, she says it’s only a matter of time before he finds out. Since they have mutual friends, she’s sure that word of the project will reach him sooner or later. For now, she has put a disclaimer on her site stating that Cooper has in no way endorsed, sponsored or participated in this ‘ridiculousness’. “Bradley Cooper was not harmed in the taking of these photos. Nor was he consulted.

Danielle has received mixed reactions to her weird project. Her followers online all agree that the photographs are hilarious, but people who see her with the cut out in person obviously think she’s crazy. “When I first unfold him, people are definitely looking at me like I’m crazy” she said. “I’m so grateful that my friend, Kiesha Bond, the photographer, comes with me everywhere so I don’t look like the only crazy person.”

“Anyway, most people end up asking what we’re doing and then they love it and it’s totally comfortable. The weirdest is when people don’t say anything and just avert their eyes – how can you not ask?”

Danielle is quite popular online with over 10,000 Instagram followers, and is currently writing a book about her bizarre Bradley Cooper experiment. Well, I suppose all it takes to become a celebrity these days is to pose with a picture of one!