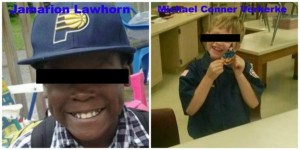 Before you even get into the details of the story, I just want to let you know that things like this used to be unheard of. A 12-year-old boy from Michigan is being accused of stabbing a 9-year-old boy to death.

He will be charged as an adult and the Kent County chief assistant prosecutor Chris Becker wants to make sure he is prosecuted to the largest extent of the law. The 12-year-old boy by the name of Jamarion Lawhorn plead not guilty in juvenile court on Tuesday to an open murder charge, which resulted in the death of 9-year-old Michael Conner Verkerke. The transcripts from his call to 911 reveals the death.

This past Monday night, Jamarion politely asked to borrow a phone from a man working in his yard, then called 911 and told them he stabbed someone on the playground to death.

“Hi. I just stabbed somebody,” Lawhorn said. “Please pick me up. I want to die. I don’t want to be on this Earth anymore.”

He will more than likely be sentenced as a child, and resentenced once he turns 21-years-old.

“This route was taken because if a juvenile is charged as a juvenile in juvenile court, the judge would have no option but to discharge at the age of 21,” assistant Kent County Prosecutor Laura said.

If Jamarion is convicted, a judge will review his case every three months and could apply the adult sentence at any time, which will probably happen. If he is not sentenced during the judges review until his 21st birthday, a judge will have to let him free or give him another sentence.

His defense attorney Charles Bokeloo claims he needs to go through a mental evaluation to see if he is able to stand trial. He is currently being jailed until a preliminary hearing on the 13th of August.

According to Clifton, Jamarion is the youngest person in the history of his county to be charged with open murder, and also one of the youngest in Michigan.

Jamarion pulled out a knife underneath the playground sand on Monday and repeatedly stabbed the 9-year-old in the back. The little boy ran home and fell on his front porch, his mother found him and started screaming hysterically.

Jamarion called 911 and allowed the police to arrest him without a problem.

They still can’t figure out his motive.