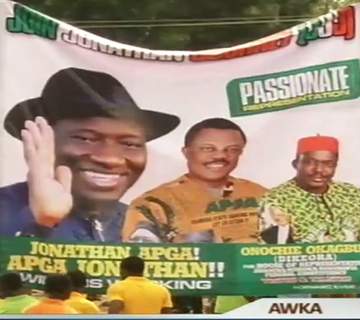 The All Progressives Grand Alliance (APGA) on Saturday declared support for President Goodluck Jonathan to run for a second term in 2015.

The party made the declaration at a rally and inauguration of Join Jonathan Journey (JJJ), NGO, at Ekwueme Square, Awka.

Gov. Willie Obiano of Anambra said the rally was to endorse and encourage Jonathan to seek re-election in 2015.

Obiano, however, said the party would field candidates for other elective positions during the 2015 polls.

He said the party would not give automatic ticket to anyone apart from the National Chairman of APGA, Chief Victor Umeh, who would run for the Anambra Central Senatorial seat.

On his part, Umeh explained that the endorsement of Jonathan for a re-election was supported by all the national executive council members of the party.

Umeh said the conduct of free and fair elections in Ekiti and Osun states under the president was an indication that democracy had come to stay in the country.

“He needs to be re-elected for another four years. We have seen his striking humility and calmness in dealing with the affairs of the country”, he said.

The APGA boss assured that his party was in firm control of structures in the state and would be in the position to ensure victory for President Jonathan.

According to him, the 21 local council chairmen and 318 councillors in the state are in support of the call for Jonathan’s re-election

They stressed the need for unity and peace in the South-East geo-political zone to move forward as a people.

The Director-General of JJJ, Chief Ben Oranusi, said the organisation was the vision of Igbo people to ensure the re-election of Jonathan, who he described as “good brand”.

“The base for JJJ is the Igbo race. We do not claim to have the entire nation but will carry our campaigns to other states of the federation”, he said. (NAN)