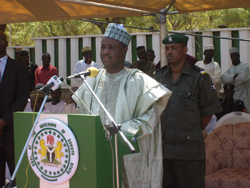 Governor Aliyu Wamakko of Sokoto State has declared that because Nigerians are tired of the manner they are being governed, they now yearn for a leadership change that will ensure that the Peoples Democratic Party-led government of President Goodluck Jonathan doesn’t return in 2015.

The governor also noted that the gale of impeachment currently sweeping across All Progressive Congress (APC) states, will neither deter the desire of the APC to unseat the PDP, nor guarantee success for the PDP in the 2015 general elections.

“They can go and do what they did in Ekiti, by bringing thousands of policemen and soldiers and so on. They started bribery. They can do it in one state, but they cannot do it in the whole of the country. Nigerians are tired of PDP, and they are tired of the way and manner they are being governed, and they are yearning for a change”, Wamakko added.

Nigerians, he stated, need to clearly understand that the bad image the country is grappling with has been brought about by the PDP-led government.

Speaking on how he has been able to achieve harmony and sustained peace in Sokoto for the past seven years, Wamakko said because he respects and loves his people, they also have reciprocated by loving, trusting and respecting him: “Let people feel respect, let them feel loved. The thing is for the people to be loved, because there is no respect when there is no love, and love is what we are doing in Sokoto.

“For example, when I came in 2007 as the governor, my first priority was to ensure free primary and secondary education for anyone living in the state, whether you are a Muslim, Christian, Hausa, Yoruba, Igbo, Idoma, or whatever tribe. No matter where you came from, nobody is paying any fee in Sokoto. Since I came, I’ve made all the tribal chiefs in the state be on my payroll. I do have consistent meetings with them to share their feelings and to know what it is that they needed. These and many, among other processes in my governance, make people understand where we are going and they therefore pray for us”, he said.