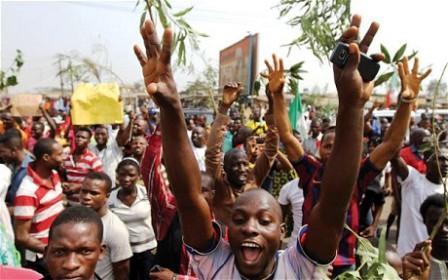 Youths groups under the aegis of the Niger Delta Youth Leaders Council on Thursday announced a last minute cancellation of their one million man march on Abuja, the nation’s capital, in support of President Goodluck Jonathan to declare his ambition to run for second term in office.

The groups said they decided to shelve the rally planned in honour of people who died from suspected Boko Haram bomb blasts during the Eid-el-Fitr celebration.

Addressing reporters yesterday in Abuja, coordinator of the groups, Barrister George Turnah, said after series of consultations with stakeholders, it was resolved that the rally be suspended based on the “mood of the nation and security reasons and as well to condole with our brothers in the north who lost loved ones during the several bomb blasts in Kaduna, Borno, Yobe and Kano states”.

According to him, a new date will be announced for the rally later.

Recall that the pan-northern socio-political organization, the Arewa Consultative Forum, ACF, had on Wednesday said the planned rally was ill-timed and a disregard to the feelings of Nigerians, particularly those in the North, who are under constant threat of terror attacks. It also urged northern youths to participate in the rally.

Turnah said the Nigerian youths also condole with President Jonathan on the issue of terrorism and urged him to “go ahead in his efforts in securing the abducted school girls”.

He urged politicians to put Nigeria’s interest first before their personal interest in the fight against insurgency.

Share
Facebook
Twitter
WhatsApp
Previous articleDokubo-Asari Petitions DSS Over Allegations He Sponsored Attack On Buhari
Next articleStrike: Suswam Says He Had Choice To Either Reduce Salaries Or Sack Workers
- Advertisement -