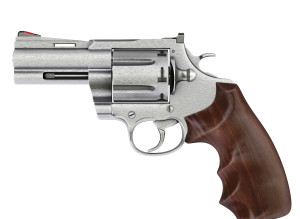 A kindergarten student in Pennsylvania brought a loaded revolver to school on Monday, according to authorities.

Police in Aliquippa, a city northwest of Pittsburgh, said the gun was found in the 5-year-old’s backpack after a friend told a teacher about it.

The family of the child who brought the gun to school is defending him, saying that the boy found the gun on a bed at home and wanted to keep it away from his 3-year-old brother.

The boy has been suspended, but family friends told WPXI that it was an accident.

A letter was sent Tuesday to the homes of all other parents who had kids at the school, but some of them told WPXI they were upset that they didn’t know about the incident sooner.

Police are weighing whether or not the child’s mother should face charges.

Earlier this year, a Pennsylvania woman faced charges, including reckless endangerment after her 6-year-old unknowingly brought a loaded gun to school, according to WTAE.

In 2013, a Massachusetts kindergartener was suspended after he brought a toy gun to school. His mother was upset by the disciplinary action and vowed to fight the suspension.