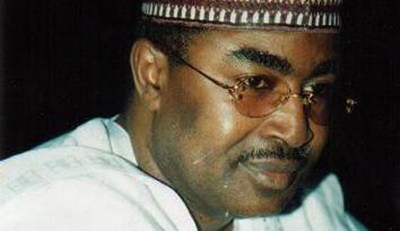 A former military administrator of Lagos State, Brig-Gen. Buba Marwa (retd), has denied speculations that he has stepped down for the Adamawa State acting-governor, Ahmadu Fintiri, ahead of the October 11 governorship bye-election.

Marwa, who has already picked up his declaration of interest and nomination forms at the national secretariat of the Peoples Democratic Party, PDP, also denied showing support for another aspirant, former EFCC Chairman, Nuhu Ribadu.

Speaking in Yola, the Adamawa State capitalTuesday, Mr. Marwa told journalists that though he held consultations with some of the PDP aspirants, he was yet to step-down for any of them.

“Yes, I had talks and discussion with some of my co-contestants but we are yet to arrive at a conclusion. Instead, I should rather ask them to step down for me”, he said.

Speaking on the issue of waiver within the PDP, the former military administrator said it had been overtaken by events. He noted that in previous cases, some people who defected to PDP were allowed to contest executive positions after spending only two months in the party.

He said he expected the same gesture to be extended to him, Mr. Ribadu and Markus Gundiri – all three aspirants being defectors from the All Progressive Congress, APC, in the spirit of fairness.

“Our constitution in PDP says you can run for election on the platform, for executive or party position after a two-year stay in the party unless you get a waiver. Those with me in the Congress for Progressive Change, CPC, who went to PDP in less than two months, participated in congresses; did anybody talk about waiver?

He assured the people of the state that he was following the process of securing the waiver. He said the affected aspirants’ complaints had been sent to the national secretariat of the party and expressed confidence that the matter would be resolved amicably.

When asked to comment on the decision of the acting governor to contest the bye-election, Mr. Marwa said, “The best person that will answer the question will be the acting governor himself, but I know I heard different comments. Ultimately, a man has to take his decision on what he feels is appropriate and what he thinks he ought to do. The bottom line, the electorates will have the final say”.

He said he was ready to support the PDP even if he lost out as an aspirant, provided a level play ground was provided for all aspirants. He noted that President Goodluck Jonathan had assured all the contestants of a level playing ground.

“There is no anointed candidate from presidency or the national leadership of PDP. I wish to say this categorically that I myself have sat face to face with President Goodluck Jonathan, when I went to notify him of my intention. Mr. President made it very clear that he did not believe in imposition and the anointment of a candidate. He believes in democracy, rule of law and the electoral process.

“Mr. President told me himself that the PDP wanted the most popular, most acceptable candidate to emerge. So it is up to all aspirants to compose themselves, sell themselves to the electorates and provide the programmes they have for the people”, he said.