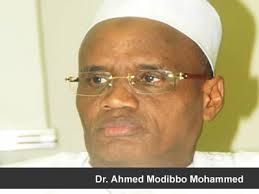 A Peoples Democratic Party (PDP) governorship aspirant in Adamawa State and former Executive Secretary of the Universal Basic Education Commission, UBEC, Dr Ahmed Mohammed Modibbo, has called for a level playing field for all those seeking the party’s ticket in the October 11 by-election.

He says every aspirant should be accorded a fair treatment.

“We are all stakeholders in Adamawa politics and so our rights must be respected in this election. Therefore, I’m calling for fairness and a level playing ground for everyone who is interested in this race. This is because power belongs to the people but it is only given by Almighty God”, he said in the build up to the party primaries to pick its flag bearer.

He also cautioned his fellow aspirants to eschew what he termed dangerous scheming and political vendetta capable of plunging the state into crisis.

Modibbo spoke at the state PDP secretariat in Yola, the state capital on Friday while declaring his intention to vie for the vacant Adamawa governorship seat.

In a statement, Modibbo’s Special Assistant on Media, Julius Toba, quoted him as pledging to commit the best of his ability to progress, peace and prosperity of Adamawa citizens.

The governorship aspirant is said to be disturbed by “the rate of poverty, under-development, illiteracy, laziness, corruption and backwardness in the state.

“For this reason and more, he is compelled not just to stand and watch but to participate and commit himself and his teeming supporters to improving the living conditions of his people”.

The aspirant assured that security, affordable healthcare, education, massive agricultural and rural development, poverty alleviation, women and youth empowerment and industrialization, among others would be the focus of his administration.