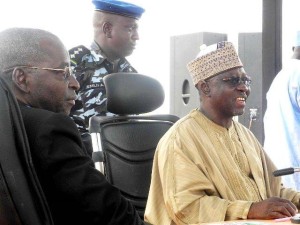 The Nasarawa State chapter of the Peoples Democratic Party, PDP, has warned that the unguarded utterances of the National Publicity Secretary of the All Progressives Congress, APC, Alhaji Lai Mohammed, was capable of truncating the country’s nascent democracy.

The state chairman of PDP, Yunana Iliya, in a statement issued in Lafia and made available to journalists, said the recent comments by the APC spokesman over the planned impeachment of Governor Tanko Al-Makura could cause confusion in the state.

He, therefore, cautioned Mr. Mohammed to always consider the atmosphere in the polity before making such utterances to avoid creating unnecessary tension in the country.

“Lai is fond of making unguarded utterances and statements which ordinarily are supposed to be handled with caution so as not rubbish the constitution of the Federal Republic of Nigeria”, Mr. Illiya said.

Mr. Mohammed had earlier this week alleged that huge sums of money were being moved as inducement for the House of Assembly members in a renewed bid to unseat Governor Al-Makura even as he accused President Goodluck Jonathan and the PDP of being the masterminds of the latest plot.

”This latest move by the legislators, who are now marooned in Abuja instead of their base in Lafia, is being instigated by the PDP; this is not in doubt, irrespective of the unconvincing and tepid denial from the party. That this illegality is being contemplated under the watch of President Goodluck Jonathan is clear for all to see. In fact, it is in line with the culture of lawlessness and impunity for which the Jonathan administration has now become infamous”, the APC spokesman was quoted as saying in a statement.

However, Mr. Illiya said impeachment was a constitutional matter and what the lawmakers did was not alien to the constitution.

“We expected Lai to have thoroughly consulted the provision of section 188 of the Nigerian constitution before issuing such statements knowing fully that what the lawmakers did is not alien to the constitution,” he said.

“Does Lai want to say that the APC will legalise corruption if given the opportunity to rule this country?”

He urged Mr. Mohammed to crosscheck how government funds were spent in Nasarawa, whether it was in line with due process especially as it regards contract award and execution.

“We equally challenge the APC publicity secretary and his sponsors to come out and tell the world of any contract executed by the present APC administration in the state if that was done in line with due process of advertising such contract and bided for before execution”, Mr. Illiya said.