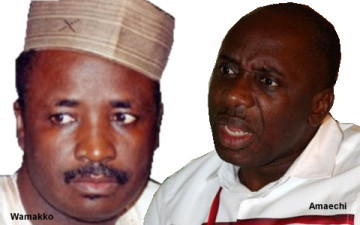 Governors Rotimi Ameachi and Aliyu Wamakko of Rivers and Sokoto States have called on Nigerians to vote wisely if they want to bid goodbye to poverty, insecurity and bad governance that have marred development in the country in the last four years.

The duo spoke separately in Rimawa town, Sokoto, Thursday at the inauguration of a modern agricultural skills acquisition centre constructed by Wamakko’s administration.

Wamakko said Nigerians should not only be clamoring for change but make it a reality through their votes.

The governors, who are of the All Progressives Congress, described the current leadership at the centre as weak, inefficient and has failed to deliver in all aspects.

According to them, the APC is ready to change the direction of Nigeria and Nigerians to a secure and better nation in the interest of the citizens.

In his remarks, Ameachi said there was need for a total departure from where Nigerians are now, adding that “the only treatment that can cure Nigerians of the Peoples Democratic Party is APC.

“If you remember your childhood days when you have headache, doctors prescribe APC for you and you don’t need any alternative today than APC to bring back the country to life”, he said.

Amaechi, who is chairman of the Nigeria Governors Forum, described Wamakko as a governor who dispassionately works with honesty and detests corruption to a fault.

Wamakko said APC as a party was built and focused for a better Nigeria, stating that “myself (sic) and Ameachi are like mind with similar ideas aimed at promoting and projecting the party in good light.

“APC is about Nigeria and not ourselves in the interest of transparency, accountability, good governance, food, lives and property security of Nigerians and affordable housing for all”, he stressed.