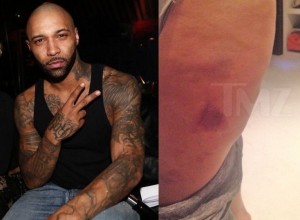 It’s really sad to see that this trend is gradually becoming a norm in America. Everyday you hear of men that violently attack their partners and some are beaten to the point of death.

Famous rapper Joe Budden allegedly beat his girlfriend by slamming her head into the dashboard of a car.

According to TMZ, Joe was pissed off when he saw photos his girlfriend with some men and he flipped out.

His girlfriend was at a restaurant in New York, when an angry Joe dragged her out of his car, then allegedly choked her and slammed her head into the dash.

The girlfriend shared graphic images of her injuries.