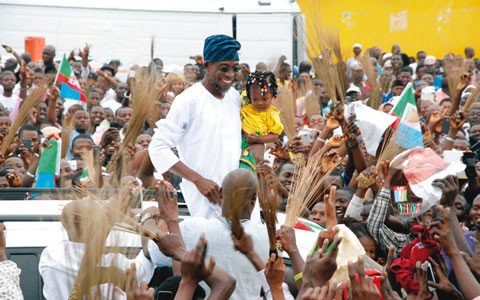 Former Vice President Atiku Abubakar has described the victory of Ogbeni Rauf Aregbesola in Saturday’s governorship election in Osun State as a measure of the popularity and acceptability of the incumbent governor and the All Progressives Congress, APC.

Recall that Atiku had some few days before Osun people went to the polls, called on his in-laws (his first wife, Titi, is an indigene of Osun State), not to let him down by voting overwhelmingly for the APC candidate.

“The victory of Governor Aregbesola and the APC in the governorship election in Osun State is very symbolic. It shows clearly that my in-law and the incumbent governor is very popular among his people of Osun State”, he said.

“It also shows significantly that the people of Osun State are at home with the APC and the mass oriented policies associated with our great party”, the former VP added.

Also, the Speaker of the House of Representatives, Aminu Tambuwal, has congratulated Mr. Aregbesola over his re-election for a second term.

The speaker also commended the large turn-out for Saturday’s election, saying it was a sign of good things to come.

“The enthusiasm shown by the people of Osun in taking their destinies into their hands and determining who should lead them should be applauded. Nigerians should look forward to future elections with the expectation that their voice, through their votes, would be heard and respected by all”, the speaker said.

Similarly, the out-going Governor of Ekiti State, Dr. Kayode Fayemi, who lost his re-election bid in June, described the outcome of the election as an expression of the will of the people.

Fayemi said that the people of Osun deserve praise for rewarding Governor Aregbesola’s leadership with a new term.

“The election in Osun has shown that performance still counts in electoral contest and that the average voter, if allowed to make his /her choice freely, would vote for the candidate and the party that have the greater impact on their lives”, he said.