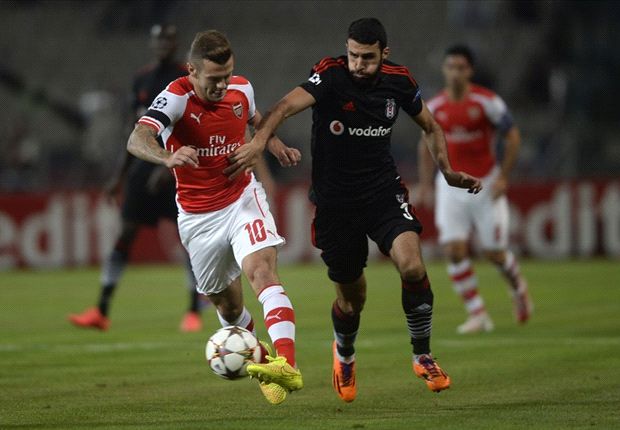 Aaron Ramsey received his marching orders for the first time in his Arsenal career.

Arsenal and Besiktas ended in a draw in the first leg of the Uefa Champions League qualifiers in Turkey.

The home side had the first initiative. Former Chelsea striker Demba Ba tried to lob from the half line immediately after kickoff, but Sczeseny was equal to the task.

Soon afterwards, the Gunners began to grow in confidence and should have drew first blood, but a fantastic block prevented Giroud from scoring, after good work from new signing Alexis Sanchez to tee the Frenchman.

Demba Ba continued to cause nuisance in the other half, but his volley effort was saved by Sczeseny.

In the second half, Ramsey linked up proficiently with Giroud, but the Wales midfielder’s first touch was poor.

Mikeael Arteta was forced off with a leg injury and Flamini replaced him, who was booked moments later.

In the closing stages, Ramsey was sent off after pulling Oguzhan Ozyakup’s shirt, and that rules him out of the second leg at the Emirates next week.

Alex Oxlade Chamberlain almost scored with two minutes left on the clock but his left shot hit the woodwork.