Relatives of Ebola victims dump dead bodies on the streets of Liberia in a desperate bid to avoid being quarantined.

The deadly virus, which can cause victims to suffer from severe bruising and bleeding from the eyes and mouth, has claimed the lives of nearly 1000 people across West Africa so far. 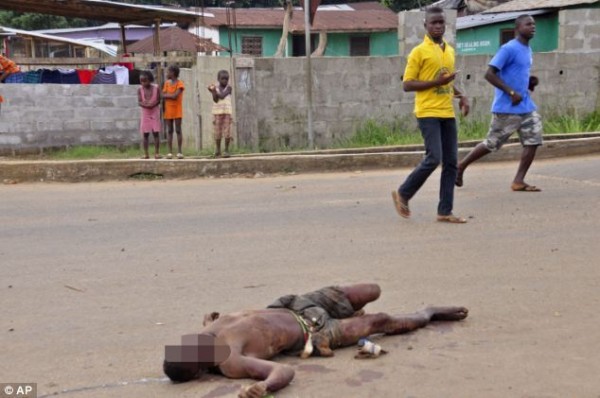 A young man lies dead in the streets of Liberia, left to rot in view of passers-by and local children.

Last week, the Liberian government announced a raft of tough measures to contain the disease, including shutting schools, imposing quarantines on victim’s homes and tracking their friends and relatives.

Today, Information Minister, Lewis Brown, said locals had started dragging their loved ones’ bodies onto the streets out of fear that the new government regulations would risk their own health. 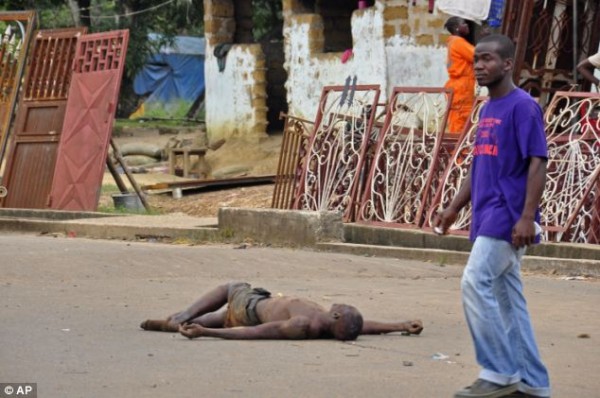 On Monday, the Liberian government announced via state radio that all corpses of Ebola victims must be cremated amid fears the incurable disease could overrun healthcare systems in one of the world’s poorest regions.

The order came after a tense standoff erupted over the weekend when health workers tried to bury more than 20 Ebola victims on the outskirts of Monrovia, LIberia’s ramshackle ocean-front capital.

Many of the victims had contracted the disease by touching the bodies of other victims as is tradition at funerals, they added.

Meanwhile, in the border region of Lofa County, troops were deployed on Monday night to start isolating effected communities there.

The outbreak of Ebola, which emerged in March, spread to Nigeria in late July when Patrick Sawyer, a 40-year-old American of Liberian descent, flew from Liberia’s capital to the megacity of Lagos.

Authorities in Lagos now claim eight people who came in contact with the deceased U.S. citizen Patrick Sawyer are showing signs of the deadly disease.