Former Military President of the Nigeria and National leader of the All Progressives Congress (APC) General Muhammadu Buhari (rtd), has said that he does not believe that the investigations for the recent attack on his life will be successful. 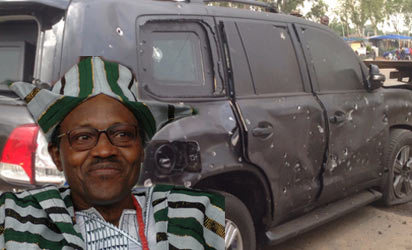 He revealed his pessimism in a sit down with popular Hausa newspaper, Rariya in the Fedral State Capital Abuja.

He also urged other opposition parties to come together with APC and help them take down the ruling party, The Peoples Democratic Party (PDP) at the upcoming 2015 National Elections.

Buhari said tht if the FG can’t still find the Chibok girls, he doesn’t expect them to catch the attackers who tried to kill him.

“You are asking me of progress. Have you forgotten that over 200 girls are missing for over three months now and nothing has happened? Ok.

I know I’m a former Head of State and I decided to be in politics of opposition. Imagine your daughter being among the missing girls. So to come and talk to me about a near-death situation while over 200 children are still missing is insensitive. I do not expect anything to come out of the investigation into the attack on me, honestly”, he said.

The APC Chief also talked about the ongoing fight against Boko Haram in the country, he said: “the problem is, as I have said in a few places, I have been in this struggle in Nigeria since 1966 when a certain group decided to wipe out our military and political leadership which led to counter-coups, which led to civil war, and which led to all sorts of unsettling instability in the society. I have been in it all and to boot, I too have been detained for more than three years.

I tried to develop the capacity to bounce back and to appeal to people, especially the elite to be serious, to participate in politics so that credible people can be representatives and leaders in the country. That’s why I am in it. The National Assembly voted a year ago (or is it 18 months ago?) on the death of NEPA (may its soul rest in peace) after billions of dollars had been spent.
What do we have now in terms of electricity? Nothing. In pension funds, in petroleum industry, it’s the same situation…and no single person is being prosecuted. What will you think of this government?”

Buhari also talked about his ambition for 2015 residential election, he said: “well I have to say that I am a loyal party member. Yes I have my own rights and so on, but being part of the merger, and the merger is not a political accident.

I participated in the presidential elections of 2003, 2007 and 2011, so for me to participate in the merger process is not an accident. I realised that my experience in partisan politics from April 2002 to now is the only way I think of in confronting this amorphous ruling party, the PDP.”

He hails from Daura in Katsina State, Nigeria.