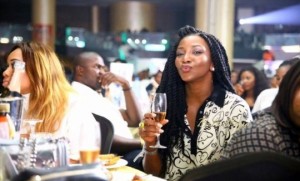 The actress who has signed deals with multi-national companies in the past year, including Etisalat, Amstel Malta, Range Rover Evoque and MUD Cosmetics beat pop sensation, Iyanya who was in second place.

Peep the full list of  ten richest celebrities in Nigeria  – Based on endorsements.

Genevieve Nnaji is representing or has represented brands like Lux, Cintrion Energy drink, Range Rover Evoque, Etisalat, Polo and Amstel Malta. The Etisalat deal alone reportedly earned her N100 million. Her deal with Polo is in the region of N70 million, while the Cintrion drink deal allegedly got her N50 million.

Psquare’s deal with Glo is said to be N140 million.

Wizkid’s deal with MTN is worth N45 million, his deal with Pepsi worth about $350,000 (N57 Million). He also has an endorsement deal with Guinness.

The Don Dorobucci gets paid nothing less than N50 Million from Loya Milk. He also has a N25 million deal from MTN.

Omawumi’s deal with Glo is said to worth N25 million. She also has deals with Konga reportedly worth between N5 – N10 million, as well as Mortein & Malta Guiness.

9. Davido – N30 million MTN Pulse deal The OBO has deals with MTN Pulse and Guinness Nigeria. His MTN deal is reported to be worth N30 million, while his Guinness endorsement deal hasn’t been made public.