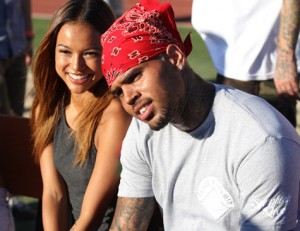 After the fights, the break-ups and what-not………it seems this couple are going to make it through thick and thin.

Superstar singer — Chris Brown and Karrueche are apparently back together again after their brief breakup.

To show his dedication to his loyal girlfriend, Chris posted a photo of her on Instagram as his Woman Crush Wednesday and even spoke about starting a family together.

“@karrueche damn near 5 years and this woman still putting up with my shit,” he said. “Need to have this baby and stop playing! Lol! My WCW.”

On Monday, Karrueche named Chris her Man Crush Monday. “Lovers.. Friends.. We love, we laugh, we fight.. It’s complicated and I can’t explain it but it’s not for you to understand but us .. My MCM,” she said.

The on-again, off-again couple broke up briefly after allegations that Chris cheated on her during his trip to St. Tropez. Chris insisted that the rumors were false and they were able to hash things out at Chris’ charity flag football game over the weekend.

Their fans were happy to see them reunite. “You guys are the perf couple stop messing it breezy,” said one commenter, while another added, “I swear you guys are the cutest thing.”