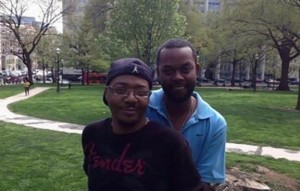 A church in Florida canceled a man’s funeral the night before because they didn’t want to hold services for a gay man. His name is Julion Evans (pictured on the left) and he was only 42-years-old. He died from a disease called Amyloidosis.

This disease attacks the internal organs inside the body. The man’s husband Kendall Capers, and his family planned a beautiful memorial service at the New Hope Missionary Baptist Church. Things took a turn for the worse, as soon as the church members read Julion Evans obituary.

They made sure to cancel the service an hour before it started because he was married to a man. They were bold enough to call the dead man’s family and tell them the funeral could not take place. They told Julion’s mother it would be “BLASPHEMOUS” for her son’s funeral to take place at their church.

His mother called the local news station as soon as she stood at the foot of her son’s casket. Hs mother told WFLA the news was “HORRIBLE.” Church pastor TW Jenkins told KSDK, “I try not to condemn anyone’s lifestyle, but at the same time I am a man of God and have to stand upon my principles.”

What nonsense, they will bury a murderer, a rapist, child molester, an adulterer, etc. and surely have done so. Bet they have even buried women who had abortions. And, no, they have no idea who really “repented” and who didn’t, not that it is their place to judge anyway.

The service continued at a local funeral home. This is truly a sad story.