If there was one team destined for relegation last season, it was Ian Hollway’s disjointed eagles. When the light at the end of the tunnel was dim, Pulis brought a promise land; singlehandedly guided the team to one of the highest placed finish (11th) in more than a decade.

But in a strange turn of fate, on the eve of the visit to North London, the Welsh man parted ways with his employee.

Steve Parish,co-chairman of Crystal Palace, who’s ridiculously identical to Tarzan, continued to express optimism that the club would be fine without the former Stoke City manager and all they require for projection is a gaffer with Premier League experience.

To my bewilderment if rights on whom and who to bring into the club wasn’t the fault for his rancor exit, well it could ostensibly be one of these:

1) Steve Parish wants to quit football to get the lead role in an unknown upcoming Tarzan franchise and Pulis must be Jane Porter.

2) The World is coming to an end

3) The apparent Bromance between the duo went sour

4) Vincent Tan to buy Palace. And Nobody wants to work under that bloke.

For a guy who has supported the club he now administers since he was four, Parish’s out of ordinary love for Crystal Palace is coinciding with his sacred duties.

There was no excuse to justify Pulis exit. And if it required him to get a summer night out in Mars, with Kim Kardashian and her sisters keeping him company just to make him happy.

Tony Pulis is a top notch manager and certainly illuminated his reputation in the demeanor of last season, and it wouldn’t be a grueling task in finding a new job, where he would be regarded as a semi-god. For Crystal Palace though, searching for a manager, on a low budget to replicate his jumbo works would equally be as difficult as their Premier League survival this season. Crystal Palace 0- 1 Tony Pulis

Van Gaal got a difficult job ahead

At first, his decision to go 3-5-2 never came under scrutiny, at least before the Swansea humble. The pre-season went fine for the Manchester club, winning four out of four. It was all lucent and many anticipated the debut output of the 3 defenders tactics in the EPL against the Swans- 45 minutes was enough to show it was garbage.

With key players missing, which frankly are no excuse, United never looked solid at defense with the trio of Jones, Smailling and Blackett. At some point the liberty statue was preferred to their presence.

In the midfield, there was no bite whatsoever from the men who were required to orchestrate play. If for example, a player like Robben was available to run 40 yards to create something meaningful, maybe, just maybe, Rooney won’t be isolated in the final third. In the midst of negatives though, Adan Januzaj continues to parade his talent, and you expect LVG to find a formation to fit the Belgium where he is not required to do the defensive dirty work. 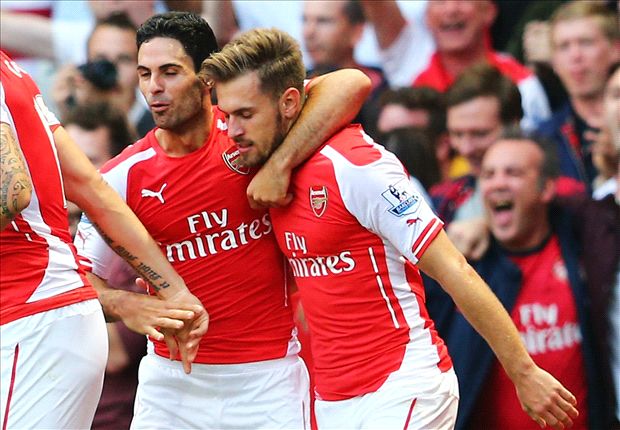 One of the reasons Alex Ferguson was so successful in his tenor was his team’s ability to moil out results when the going gets tough. Even when the red devils were second best, they found a way to have the last laugh.

Unlike Arsenal some seasons back. They played the ‘’nice football’’ but subsequently failed to win.

Yesterday was an irony. Hangeland’s glancing header drew first blood for Swansea, but a more daring header by Koscienly leveled matters before halftime.

In the second half, it was entirely dire situation for the home team, that hearts were in mouths for a soccer punch imminent for Arsene Wenger’s team.

However in the closing stages, despite the below par display, Aaron Ramsey was at the right spot to tap in and send the home supporters into raptures.

Ramsey is certainly living in Disney land. Some seasons back, he was presaged to be sold out after his execrable showings coming back from being Shawcrossed in the Britannia Stadium. But his determination and in the guidance of Arsene Wenger prompted his incredible rejuvenation. They say Sky is the Limit, for Ramsey, it’s the starting point.