Residents and monarchs of Onigbedu Community in the Ewekoro Local Government area of Ogun State, are fighting over the building of an Oro shrine in the commuity. 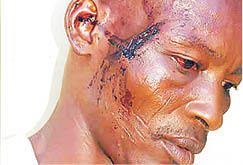 The planned shrine has caused panic among residents as they said that the shrine would disturb the inter-religious peace in the community.

The monarchs, led by Oba Matthew Ajibulu, however said the shrine would be of no disturbance to the residents.

Some residents who are currently living in fear since the announcements of the planned shrine was made by monarchs said their fear was confirmed when some residents were injured during a protest against the construction of the shrine.

One of them, the Chairman of Onigbedu Community Development Association, Lukman Kazeem, described the shrine as a threat.

Lukman Kazeem claimed that despite warnings and protest against the building of the shrine, some monarchs still went ahead with the Oro activities without informing residents of the community.

He said: “A week after our meeting, they went ahead with their plans. Most people were caught unawares, especially our women. According to tradition, it is a taboo for women to witness any Oro ritual. Most workers working in companies nearby, who closed late on that fateful day, were not spared as many had to sleep in the bush to avert being used for rituals.

“We are scared; we don’t want such a thing here. For about three months now, we have been hearing alarming reports. Our lives would be in danger if this shrine is established in our community.”

He appealed to security operatives, state and local governments to intervene in the matter.

He added: “We are a Christian and Muslim dominated community, we are suspicious of the recent ritual activities in the community. We are wary of any shrine that will cause the kidnapping of the people for ritual purposes.”

Meanwhile the monarch of Onigbedu, Oba Mathew Ajibulu accused the residents of spreading falsehood saying thresidents were properly informed before the commencement of the Oro activities, while adding that the practice was not strange to the community.

He said: “Those complaining are in the minority. Their claim that the practice is strange to this community is not true. Since I have been in this community, we have performed Oro rituals to appease the gods. We do it yearly and elders and traditional rulers participate in it.

“This particular one they are protesting against is not expected to be done by only our community; it also held in Itori, Olujobi and other towns. It is to send evil away from the towns. It is for our peace and those complaining know about it.

“The Oro activities were duly announced and everyone was informed. We respect government policy on the matter and we are not law breakers.”

Police Public Relations Officer of Ogun State Command, Muyiwa Adejobi, however, said the police was not aware of any issues relating to Oro activites in the towns saying: “No case of such was reported to the police,” Adejobi said.

Oro is a dreaded cult feared, especially by women, in the South West Nigeria. It shrieks in a strange voice and manner meant to instill fears.