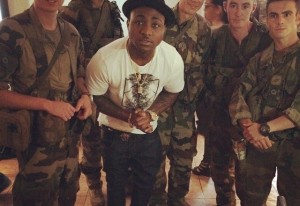 The superstar singer who has been gaining accolades all year has unfortunately gotten himself in a little bit of bad publicity.

Davido is currently in Abidjan, Ivory Coast for a show.

The “Aye” star shared photos of himself via social media but instead of the normal love he receives, he was greeted with criticism.

Davido shares this picture flanked by soldiers with the caption, “Protected!! 0 EBOLA!!”.

Fans of the star lashed out at him for the caption, as a good number of them deem it insensitive.

He later sent out a tweet that, “God is Bigger than Ebola. Live your life. One love.”