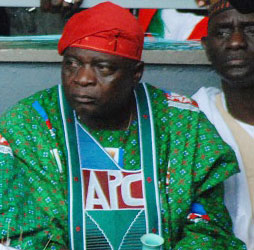 Omisore, who was reacting to Oyinlola’s defection to the All Progressives Congress (APC), said in a statement issued by his media aide, Mr Diran Odeyemi that “the former Governor is a confirmed serial betrayer, a politician who had lost whatever little followers he had due to his inconsistency, political somersaults and unreliability in political alliances”.

He alleged that Oyinlola betrayed Chief Ebenezer Babatope, who was instrumental to his becoming the PDP national secretary.

Omisore said that “the politics leading to his exit as a National Secretary was also traceable to his double dealings. While he was pushing for court action to return to office, he was holding nocturnal meetings with the APC. While he was negotiating with the President, Oyinlola had directed his few supporters to defect to the APC. He is never a consistent political player”.

He continued: “We want to put it on record that his defection has no impact on the electoral fortunes of the PDP in the Saturday election. If any, the exit has cleaned the PDP of the last dark spot which constitutes a moral burden on our shoulder. By defecting, PDP has become fully sanitized and poised for a new lease of life in the government to be formed after the August 9 victory”.