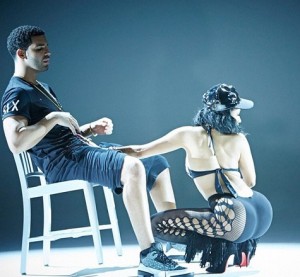 It’s safe to say that if Nicki Minaj didn’t make it as a rapper, she would probably be in a club somewhere stripping, as she has shown countless times that she just likes to strip for guys.

Drake was the lucky guy this time as Nicki Minaj gets her freak on.

In some behind-the-scenes photos from her “Anaconda” video. Wearing skintight leggings, a pink bra, and Louboutin stiletto boots, the voluptuous vixen squats down and gives her Young Money brother a lap dance while he sits in a chair and takes it all in.

Nicki changes into Jordans and puts her famous booty in Drizzy’s face in the intimate scenes, which she teased on Instagram.

“I was probably thanking the higher ups for that very moment,” tweeted Drake. “Def the best invite to a video shoot EVER. #ViewsFromMyChair #MyAnacondaWasWayUp.”

This is not Drizzy’s first lap dance from Nicki. She previously serenaded him onstage during her tour with Britney Spears in 2011.

The Colin Tilley-directed video for “Anaconda” will premiere Wednesday on VEVO. Last week, Nicki shared a vlog from the set.

Check out more photos below: –