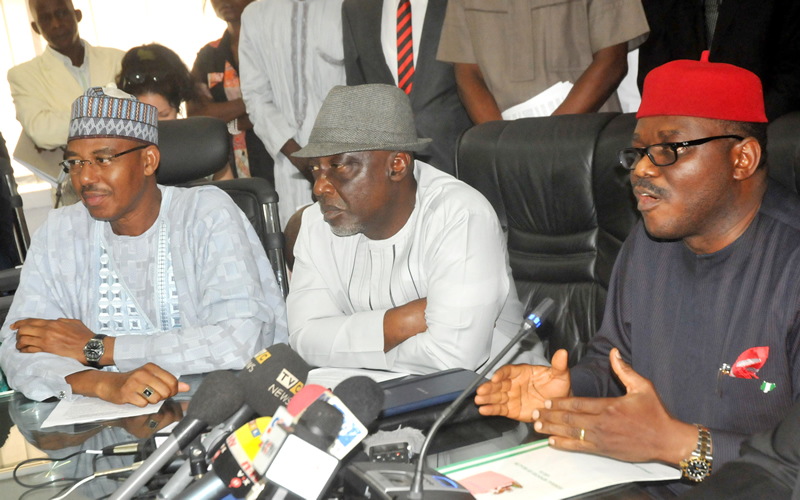 As the total number of deaths from the deadly Ebola Virus Disease in the country rises to four, the Federal Government has disclosed that it is treating eight confirmed cases of persons infected with the virus disease with an experimental drug known as Nanosilver, which it said was declared fit for use by Nigerian scientists.

At a press briefing which had in attendance, the ministers of Information, Interior, Environment and Women Affairs, the Minister of Health, Prof Onyebuchi Chukwu, said the experimental drug was confirmed fit for use and provided by Nigerian scientists for the treatment of the EVD patients in Lagos.

The Minister of Health, said that they “will follow all the medical research ethics code of Nigeria in administering the drug which includes the patient’s consent”.

Prof. Chukwu also used the opportunity to clarify media reports that 21 persons had been quarantined in Enugu, saying that “only six persons are quarantined in Enugu. Some people assume that merely seeing the lady from a distance will make them to contact the virus, that’s not true”.

He said that the Enugu Ebola case was as a result of one of the nurses who made primary contact with the late American-Liberian, Mr. Patrick Sawyer, who though quarantined, travelled against the advice of the Incidence Management Committee to Enugu.

“The newly married woman went to visit her husband in Enugu. She did not infect anybody on her way to Enugu as she had not developed any symptoms. You cannot transmit Ebola if you don’t have the symptoms”, he said.

“One of the primary contacts to the Index case disobeyed the incident manager in Lagos and left for Enugu but when she developed symptoms, she immediately contacted a health facility”, said the minister, adding that though the husband of the newly wedded nurse does not have symptoms but because of the intimate relationship, he had to be quarantined also.

According the minister, the nurse and her husband were ferried back to Lagos in special ambulances while insisting that nobody has been confirmed to have Ebola in Enugu for now.

Prof. Chukwu also said that the 21 primary contacts of Mr. Sawyer had been released as they did not show any sign of Ebola after the maximum incubation period of 21 days.

He said currently, 11 persons had tested positive to Ebola, three had died; the Liberian, a nurse and a protocol officer of ECOWAS while 169 were under surveillance.

Chukwu said all of them were secondary contacts to the index case, the American-Liberian, Sawyerr.

‘Let me clarify issues on Ebola scare in some states. The disease is still only in Lagos. None of the contacts in Enugu have tested positive. They’re still under close watch. So all the cases are still confined within Lagos State.”

“The Abia case was a Steven Johnson syndrome, the lady reacted to some antimalarial drug she took and we tested and confirmed that it was not Ebola.

“The Imo corpse from abroad died of gastroenteritis, not Ebola; the Anambra case was not Ebola too and the Abuja case was a diabetic patient who also was HIV positive. It was not Ebola”, he said.

“But if you feel differently, you can apply for a waiver accompanied with death certificate and if we are satisfied, we can give a waiver”.

He disclosed that the ministry had granted two waivers so far; two Nigerians who were brought in from India and Kenya.