After fleeing Liberia over Ebola scare, Nollywood actor Jim Iyke shared another photo of himself, sitting at a table with a variety of food in front of him.

The actor, who is presently in an undisclosed area, seems to be doing fine.

He posted the photo below with the caption, “Breakfast; somewhere serene. Glad to be away from all the madness. Thank u lord 4 everytime u hide me in ur pavilion #Ikechukwu.” 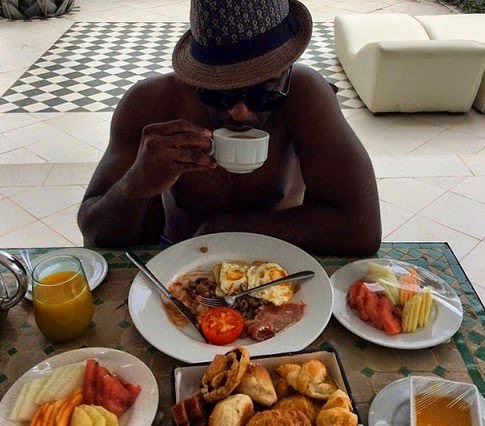 Yesterday, Jim Iyke had posted a photo of himself wearing an expensive mask with a message on his Instagram page saying, he was leaving Liberia earlier than scheduled because of the rising case of Ebola in the country.

Jim’s photo had sparked a lot of outrage on social media, as some Nigerians suggested the actor should be isolated and monitored for a while, soon as he arrives Nigeria, in order for him not to spread the virus, in case he has already been infected.

Meanwhile, Nigerians also got alerted to Ebola last week after a man from Liberia who had symptoms of Ebola died in a Lagos hospital.

Ebola is transmitted through close contact with the blood, secretions, organs or other bodily fluids of infected animals, and in many parts of West Africa people are being told to cover as much of their body as possible to ensure the infection doesn’t enter their bloodstream through a small cut.