An ex Minister of the Federal Capital Territory and a Chieftain of the All Progressives Congress (APC) Nasir El-Rufai made an incredible revelation in the afternoon of August 28, 2014. 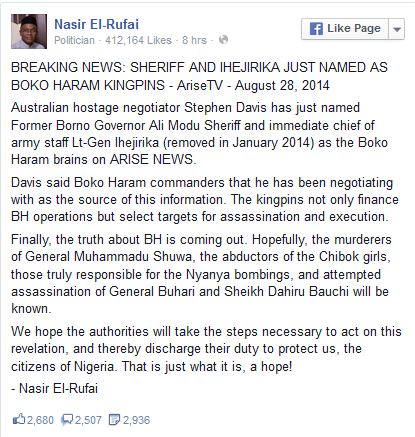 The ex minister tagged a former governor of Borno State, Modu Sheriff, who has recently defected to the ruling Peoples Democratic Party (PDP), and Lt. Gen Azubuike Ihejirika (an ex chief of army staff, till January 2014) as Boko Haram sponsors and kingpins.

El-Rufai based his message on the words of a renowned Australian hostage and crisis negotiator Stephen Davis on AriseTV.

Davis spent 4 intense months in the troubled North-Eastern states. He had been allegedly hired by President Goodluck Jonathan to help rescuing over 200 Chibok girls.

According to APC Chieftain, Davis claimed the information had been disclosed to him by Boko Haram commanders. The terrorists do not hide the fact the pair (Gen. Ihejirika and Modu Sheriff) has been ‘the brain’ and targeted individuals for assassination and execution.

The former minister expressed hopes that this information would further help to expose the abductors of the Chibok girls, the terrorists behind Nyanya bombings in Abuja, assassins of Gen. Muhammadu Shuwa and those who attempted to kill General Muhammadu Buhari and Sheikh Dahiru Bauchi.

El-Rufai’s statement triggered a heated conversation, gathered more than 2,500 Likes, shares, and over 1,875 comments at the time of filing the present report. Read the message below: