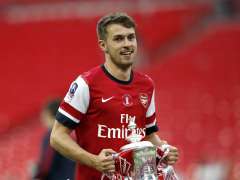 The Welsh starlet had a tremendous 2013-2014 season, that culminated to the winning goal in the Fa cup triumph for his club.

Speaking to Goal, Campbell who won 2 Premier League titles with the NorthLondon club and also part of the mouth-watering invincible team, had good words for the 23-year old Midfielder.

“When he first joined the club he was a very shy boy.

“He got a really bad injury against Stoke and that put him back a couple of years,” Campbell said.

“Now he has come back really strongly. He is expressing himself now and his real ability is coming out.

“There are still more levels in him. I like that now the protective shield around him has been broken. That is important to Arsenal and it is important for him to keep on showing who he really is and expressing himself in a proper way.

“That will transfer onto the pitch and ultimately that will be good for Arsenal as well as Wales.”